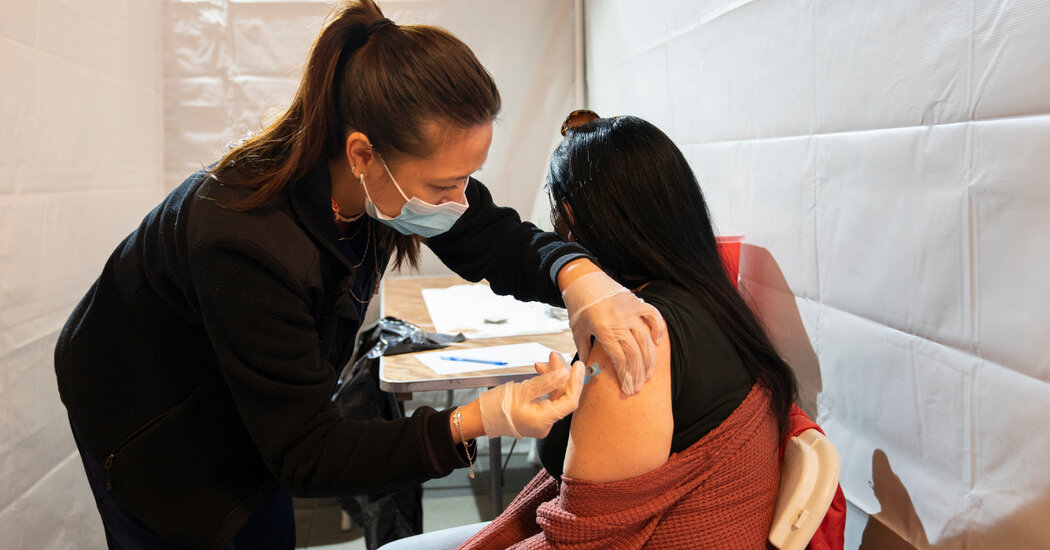 The mandate is the first full vaccine requirement for any group of city workers and affects well over 150,000 teachers and staff members.
Erdeundleben.com–

New York’s requirement that virtually everyone who works in the city’s public schools be vaccinated against the coronavirus compelled thousands of Department of Education employees to get at least one dose of a vaccine in the past week, leading to extremely high vaccination rates among educators, according to preliminary data released on Friday.

At least 98 percent of principals and 93 percent of teachers as well as 90 percent of non-education staff members had been vaccinated by Friday, city officials said. The figures are likely to change by Monday, the deadline for meeting the requirement, because more employees are very likely get shots or provide proof of vaccination over the weekend.

The Department of Education reported more than 18,000 shots that have been given to staff members since Sept. 24.

“Mandates work, they make us safer,” Mr. de Blasio said in the TV interview. “I would urge every mayor in America: Do it now, get those vaccine mandates in place ahead of the cold weather, when things are going to get tougher. Do it now, or you will regret it later.”

The union that represents city teachers, which has been tracking vaccinations among its members separately, said that about 95 percent of its members had gotten at least one vaccine dose.

New York’s mandate, which takes effect when the school day starts on Monday, is the mayor’s first attempt at requiring vaccination without a test-out option for any city workers. It could lay the groundwork for a much broader requirement for the city’s vast work force.

The requirement applies to well over 150,000 people who work in the nation’s largest school system, including teachers, principals, custodians, school safety agents and lunch aides.

School employees who did not show proof that they had gotten at least one vaccine dose were automatically placed on unpaid leave late Friday. Anyone who got a shot over the weekend would be allowed to report to school Monday and added back to the payroll.

Any educators who do not provide vaccination proof by the Monday deadline will be barred from entering schools and placed on unpaid leave, with health insurance, for a year. Those who get vaccinated after Monday can return to school once they have received a first dose.

Students arriving for the first day of school at P.S. 25 Bilingual School in the Bronx. Some New York schools are bracing for staff shortages when a vaccine mandates takes effect on Monday.Credit…Anna Watts for The New York Times

While the mandate clearly pushed many employees to get vaccinated, the mayor’s decision to impose it will be further tested this week, as some schools grapple with possible staff shortages caused by the departure of unvaccinated employees.

At many schools, nearly all staff members are vaccinated, and the mandate will have little to no effect. But some schools are likely to have to call on large numbers of substitute teachers. Others will probably have to switch from serving hot lunches to offering grab-and-go options because of a lack of cafeteria aides.

During a radio interview on Friday, Mr. de Blasio insisted that there were more than enough substitutes to cover for the thousands of educators and support staff workers who were expected to be placed on leave Monday.

As of Friday afternoon, about 4,000 teachers were still unvaccinated, and about 30 principals or assistant principals had not gotten a shot. About 15,000 non-education staff members were not vaccinated. City officials said they were prepared to fill those positions by redeploying other employees. About 500 employees had been granted religious or medical exemptions,

There are roughly 9,000 substitute teachers and another 5,000 substitute paraprofessionals who are vaccinated and can be deployed to schools immediately, said Danielle Filson, a spokeswoman for the mayor.

The city has also promised to provide schools with additional money to hire substitutes, and some central office employees who are certified to teach will almost certainly be called into schools, at least temporarily.

The last-minute rush by school employees to get shots mirrored a similar scenario involving health care workers around the state, thousands of whom hurried to get vaccinated in the days before a mandate for employees at hospitals and nursing homes took effect.

City officials must now determine whether they can achieve similar success among other city employees and their unions, particularly groups that have had relatively low vaccination rates, including police officers and sanitation workers.

The city’s legal authority to require vaccines for its employees was reinforced when a lawsuit seeking to halt the mandate — filed by a coalition of unions representing school workers, including the United Federation of Teachers — was unsuccessful.

“Where there’s political will, there’s a judicial way to mandate vaccines,” said David Bloomfield, a professor of education law and policy at the City University of New York’s Graduate Center and Brooklyn College.

“And in schools, especially, there is a lot of legal precedent in the face of forceful pushback by staff,” he said.

A group of teachers filed a separate legal challenge seeking at least a temporary injunction to the mandate. The request, although briefly granted by a federal appeals court judge, has now been denied by two other federal courts. A panel of judges of the U.S. Court of Appeals for the Second Circuit will hear the plaintiffs’ appeal on Oct. 14. (The teachers also petitioned the U.S. Supreme Court to take up the case, Justice Sonia Sotomayor denied the request on Friday without referring it to the full court.)

Confusion over the temporary injunction led Mr. de Blasio to delay the mandate by a week, which also enabled him to satisfy a request from union leaders who represent teachers and principals and who had argued that schools needed more time to prepare for staff shortages.

The mayor has staked part of his legacy on successfully reopening the public schools amid the pandemic, and he has said for weeks that ensuring that all adults in school buildings are vaccinated is the best way to keep the system safe.

Although the city saw extremely low virus-transmission rates when school buildings reopened for part-time, in-person learning last year, some educators and parents have expressed serious concerns about returning amid the continuing threat posed by the highly contagious Delta variant.

A few thousand medically vulnerable children have the option of learning from home or receiving in-person instruction at home.

Three weeks into the school year, it is too early to tell whether the city can keep students as safe as it did last year, when far fewer children came to school. There are roughly 600,000 more children in classrooms this year than last.

Since Sept. 13, 1,133 of the city’s 65,000 classroom spaces have closed temporarily because of virus cases and potential exposures. There have been over 2,100 cases detected among the city’s one million students, and 883 among tens of thousands of staff members. So far, only one school has closed entirely because of an outbreak. It has since reopened.

Last week, the mayor increased testing in schools and relaxed quarantine rules, a shift meant to mitigate the disruptions prompted by frequent classroom closings during the first week of classes. The mayor’s plan to test only 10 percent of consenting unvaccinated people in schools every other week had been criticized, and testing is now happening weekly.

The vaccine mandate is taking effect at a crucial moment for the city and its schools. New York’s overall number of virus cases has been declining for several weeks, and elementary school children are likely to become eligible for vaccination by Thanksgiving.

But further disruption is almost inevitable. There are still many unvaccinated middle and high school students, even though children 12 and older have been eligible for the Pfizer-BioNTech vaccine since the spring. There will almost certainly be a significant number of younger children who do not get vaccinated immediately even after they become eligible. And because breakthrough cases among vaccinated students will also remain a concern, temporary classroom closings and even entire building shutdowns will continue.

Mr. de Blasio has said he has no plans to institute a vaccination mandate for children. On Friday, Gov. Gavin Newsom of California said that students there would have to be vaccinated to attend school as soon as next fall. Los Angeles, the nation’s second-largest school district, will institute a student vaccine mandate early next year.

Eric Adams Has $7.7 Million to Spend, As Donations From Wealthy Pour In