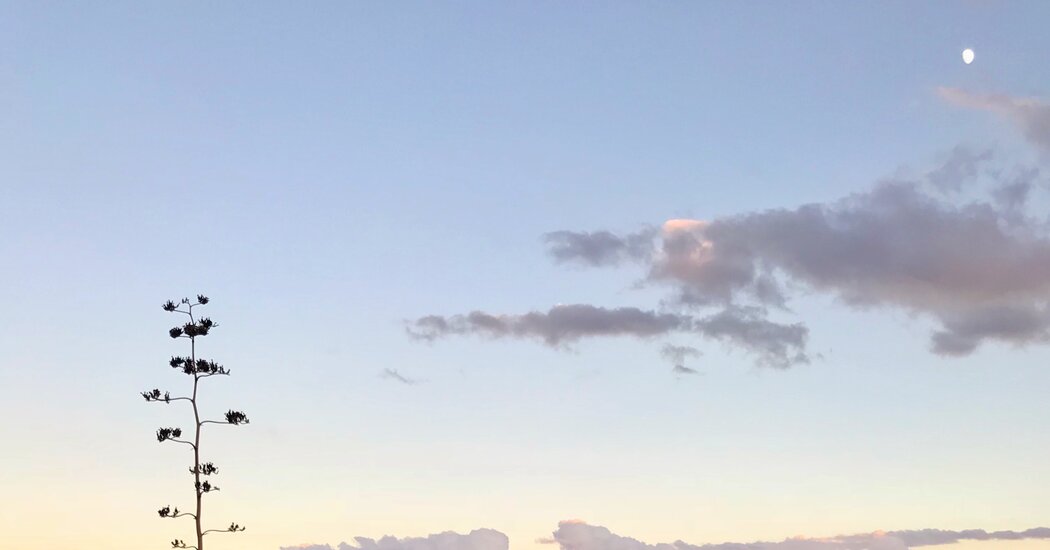 Hot-air balloons, sandhill cranes, haunted towns and Hatch chiles are just a few signs of fall in New Mexico and Arizona. Here’s where to look.
Erdeundleben.com–

Fall is the onset of outdoor season in the Southwest, when birds return to winter in the mild temperatures, skies clear of the summer monsoons and color tours may entail spotting hundreds of vibrant hot-air balloons. The following are eight seasonal activities in Arizona and New Mexico.

In and around Albuquerque, balloons are the fall colors of choice during the Albuquerque International Balloon Fiesta in October.Credit…New Mexico TRUE

A balloon pilot for more than 40 years, Troy Bradley — the first balloonist to fly from the United States to Africa — lives in Albuquerque, which he calls “the balloon capital of the world” for its wide-open spaces and favorable weather conditions that allow launches most days. Now, after a pandemic-year hiatus, the community will celebrate the Albuquerque International Balloon Fiesta over nine days of morning launches, races and rides involving more than 500 balloons (Oct. 2 to 10). “A lot of people come with apprehension, like it’s an amusement-park ride, but it’s not, it’s very gentle,” Mr. Bradley said. Balloon fans can watch the spectacle for free all around the area, but a grounds ticket (from $15) allows festivalgoers to get close to the action, talk to the pilots and collect trading cards of the balloons they hand out.

If your imagination skews to Halloween goblins, consider visiting a real ghost town. New Mexico claims more than 400 of them, most with a few foundations and castoff mining equipment, but 28 with more extensive remains, which are plotted on a state-tourism map. Some, like Loma Parda in the northeast, a once raucous town serving 18th-century Fort Union nearby, are mostly deserted. Others, such as Cerrillos, a former mining town on the Turquoise Trail National Scenic Byway south of Santa Fe, suggest the Old West with dirt streets, but you’ll find saloons and galleries functioning in the present.

In New Mexico, newly harvested Hatch green chiles show up in dishes in the fall, including in green chile cheeseburgers, the focus of an annual state fair competition.Credit…New Mexico TRUE

In New Mexico, newly harvested Hatch green chiles can usually be found by following your nose to roadside operations where the peppers are roasted over flames in rotating steel cages. The roasted chiles are the basis of a zippy sauce that is a staple of traditional New Mexican cuisine and has fed a statewide appetite for green chile cheeseburgers. The burgers are the subject of an annual competition at the state fair (the recent winner was Oso Grill in Capitan), a local contest in Santa Fe (won, earlier this month, by Street Food Institute) and a mapped trail of restaurants specializing in the dish. “The heat of the chile helps cut the fat in the cheeseburger, so they work well together,” said Josh Gerwin, the chef and owner of Dr. Field Goods in Santa Fe and Albuquerque who recently judged the two competitions. “It should be spicy and have bite.”

Stay on a farm

Outside of Mesa, Ariz., Cozy Peach, a vintage trailer resort on a farm that grows peaches, has nine renovated campers dating from 1948 to 1972.
Credit…Schnepf Farms

Indulge your romance with harvest season and book a farm stay. Glamping meets agritourism at the Cozy Peach, a vintage trailer resort at Schnepf Farms in Queen Creek, Ariz., outside of Mesa, reopening for the season on Oct. 1 (from $155 a night). There are nine renovated campers that date from 1948 to 1972, each with an outdoor fire ring, access to outdoor grills and loaner bicycles for guests to pedal around the 300-acre peach farm, reach u-pick vegetable plots or hit the farm bakery for cinnamon rolls, artisan breads and cookies. Guests get discounted tickets to farm events, including the annual Pumpkin and Chili Party, Oct. 1 to 31, featuring carnival rides, corn mazes, pig races and more (regular admission $23.95).

Arizona’s clear skies make the state a destination for everyone from amateur stargazers to research academics, and fall is the perfect time to train your eye on the skies. The dry climate in Arizona “makes the atmosphere more transparent and easier to see out of,” said Alan L. Strauss, the director of the University of Arizona’s Mount Lemmon SkyCenter, an observatory north of Tucson. The center hosts five-hour stargazing sessions for visitors that start before dark, with sunset viewing from the 9,157-foot perch, and include dinner, an astronomy lecture and a guided night sky tour of neighboring planets and more distant galaxies (adults $85). Highlights of autumn stargazing include spotting Jupiter and Saturn in the early evening sky and catching the Leonid meteor shower, taking place Nov. 16 to 17. “October and November are generally very dry when they put on a show,” Mr. Strauss added.

Fall marks the resumption of field season for geologists in the Southwest, and a favorite haunt is the Petrified Forest National Park in Arizona, where visitors can take guided hikes in mid-October.Credit…Jacob Holgerson

The Southwest is a geologist’s playground and fall marks the resumption of field season. “The heat is generally down and the light is so beautiful in October and all through February,” said Christa Sadler, an earth science educator and guide who is leading a pair of daylong hikes, Oct. 16 and 17 ($65), in Petrified Forest National Park in northeastern Arizona on behalf of the affiliate nonprofit Petrified Forest Field Institute. The park protects a variety of landscapes, including ancient logs that have been turned to stone over millions of years. “People love petrified wood because it’s just so improbable and unexpected,” Ms. Sadler said. One of her hikes focuses on a wilderness section of the park called Devil’s Playground, which includes “places that have so many petrified wood chips that we joke that it’s a prehistoric sawmill.” Visitors are forbidden from taking any petrified wood from the park, but the U.S. Bureau of Land Management allows casual collecting in specified areas in the state.

A tasting room at Rune Wines, about 50 miles southwest of Tucson.Credit…Kayla Lewis-Simpson

Arizona is likely not the first state that comes to mind when you consider a fall vineyard visit. But grape vines got their start here in the 1970s in tests of crops suitable for dry conditions. They took off in some higher elevation regions that cool off overnight, including Sonoita, about 50 miles south of Tucson, the state’s first American Viticultural Area, a designated growing region with distinguishing geography or climate. Today, there are 17 wineries in the area, including the original Sonoita Vineyards, opened in 1983, and the off-grid Rune Wines, where visitors can sample wines on a shaded outdoor patio in view of distant mountains. Pavle Milic, who co-owns the restaurant FnB in Scottsdale and created its Arizona-forward wine list, runs Los Milics Vineyards in Sonoita. He recommends malvasia bianca for a white wine, with its “undeniable Arizona aromas of passion fruit and lychees,” and montepulciano for red, “which grows vigorous in Sonoita.”

During the fall migration, tens of thousands of sandhill cranes return to New Mexico and Arizona.Credit…New Mexico TRUE

Fall migration in the Southwest isn’t just pass-through season. It’s the time of year when tens of thousands of sandhill cranes return. “They’re a sign of fall and a welcome home to their wintering grounds,” said Jon Hayes, the executive director of Audubon Southwest, which covers Arizona and New Mexico. The birds famously winter in the Middle Rio Grande area; Mr. Hayes recommends the Bernardo Waterfowl Area near Bosque, N.M., about 50 miles south of Albuquerque, for intimate viewing. Catch sometimes hundreds of hawks migrating over Yaki Point on the south rim of the Grand Canyon, or numerous varieties of hummingbirds among the more than 200 species of birds recorded at the Paton Center for Hummingbirds in Patagonia, Ariz., about 60 miles south of Tucson. If you’re looking for birds in the Southwest in general, look for water. “Rivers support up to half the bird life in these two states, though they make up only 1 to 2 percent of the landscape,” Mr. Hayes added.

Setting Sail on the Winding Waterways of California’s Delta