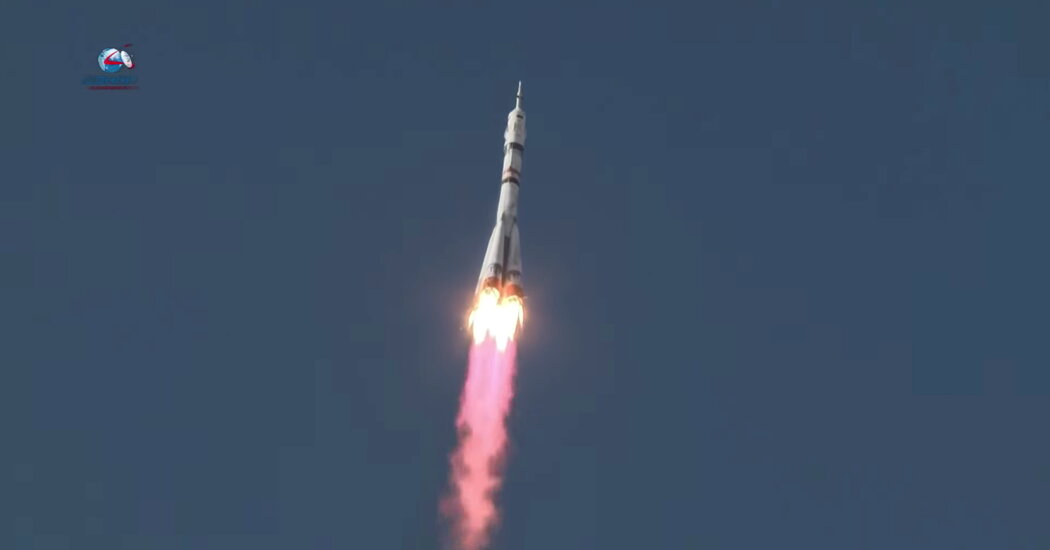 The first dog in space. The first man and woman. Now Russia is about to clinch another spaceflight first before the United States: Beating Hollywood to orbit.A Russian actress, a director and their professional Russian astronaut guide launched on a Russia…
Erdeundleben.com–

The first dog in space. The first man and woman. Now Russia is about to clinch another spaceflight first before the United States: Beating Hollywood to orbit.

A Russian actress, a director and their professional Russian astronaut guide launched on a Russian rocket toward the International Space Station on Tuesday. Their mission is to shoot scenes for the first feature-length film in space. While cinematic sequences in space have long been portrayed on big screens using sound stages and advanced computer graphics, never before has a full-length movie been shot and directed in space.

Here’s what you need to know:

What happened during the launch and what happens next? 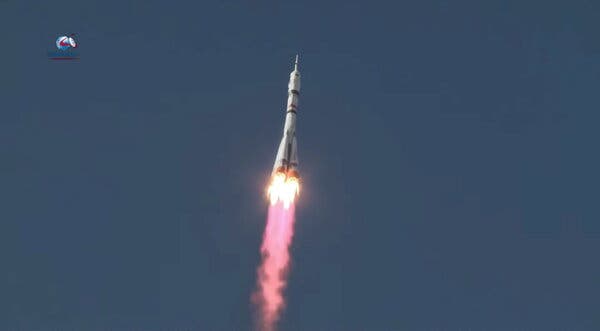 The Soyuz MS-19 spacecraft lifted off from the Baikonur cosmodrome Tuesday, carrying a film crew to orbit.Credit…Roscosmos/Via Reuters

A Soyuz rocket, the workhorse of Russia’s space program, lifted off on time at 4:55 a.m. Eastern time from the Baikonur Cosmodrome in Kazakhstan. The MS-19 spacecraft carrying the three-person crew is expected to dock with the space station about three hours later, at 8:12 a.m.

The MS-19 crew posed for photos and waved to family and fans during launch preparations in Baikonur on Tuesday. Klim Shipenko, the director of the film, “The Challenge,” held up a script as he waved to cameras.

“We didn’t forget to take it with us,” he said, according to a NASA translator, before he boarded a bus with the other crew members to get dressed in their flight suits.

NASA, which manages the space station in partnership with Russia, will host another livestream for the spacecraft’s docking beginning at 7:30 a.m. You can also watch the video in the player embedded above.

The three-hour trip, called a “two-orbit scheme,” is unusually fast for journeys to the space station, which typically last between eight to 22 hours over multiple orbits around Earth. The first three-hour trip was performed by a Soyuz spacecraft in 2020 for Russia’s MS-17 mission, carrying two Russian astronauts and a U.S. astronaut.

Who is on the flight?

Yulia Peresild, a Russian actress, during a training session at the Baikonur Cosmodrome in Kazakhstan last month.Credit…Andrey Shelepin/GCTC/Roscosmos, via Reuters

Yulia Peresild, a Russian actress, Mr. Shipenko and Anton Shkaplerov, a veteran astronaut who has completed three treks to and from the space station since 2011, are strapped inside the MS-19 capsule on their way to the space station. Ms. Peresild has spent months training for the mission.

The film crew will return to Earth on Oct. 17 along with Oleg Novitsky, an astronaut who’s been on the station since April.

“Undoubtedly, this mission is special, we have people going to space who are neither tourists nor professional cosmonauts,” said Dmitri Rogozin, director general of Roscosmos, the Russian space agency. He said he hoped the flight would help the agency attract a new generation of talent.

As an actress, Ms. Peresild, has performed in some 70 roles onscreen, and Russian movie publications have named her among the top 10 actresses under 35 years old. She may be best known among Russian moviegoers for “Battle for Sevastopol” (2015), in which she played the role of Lyudmila Pavlichenko, the deadliest Red Army female sniper during World War II.

But her prominence alone wouldn’t have been enough to secure her a seat to orbit: She was picked for the flight from some 3,000 contestants in a two-stage selection procedure that involved both tests of creativity and a stringent medical and physical fitness screening.

What movie are they making on the space station?

The movie’s working title is “The Challenge,” and it’s about a surgeon, played by Ms. Peresild, who embarks on an emergency mission to the space station to save an ailing cosmonaut’s life. Few other details about the plot or the filming aboard the station have been announced, although NASA said on Tuesday that Mr. Novitsky, one of the Russian astronauts currently aboard the station, will play the role of the sick cosmonaut.

The crew, using hand-held cameras both on board the capsule and in the space station, started filming scenes for the movie as the spacecraft approached the outpost, Rob Navias, a NASA spokesman, said on the livestream.

Why are they making a movie in orbit?

For “The Challenge,” cinematic storytelling may take a back seat to the symbolism of shooting a movie in space. The production is a joint project involving Russia’s space agency Roscosmos; Channel One; and Yellow, Black and White, a Russian film studio.

Like a lot of private missions to space these days, Channel One and Roscosmos hope the film can prove to the public that space isn’t reserved for only government astronauts. One of the production’s core objectives is to show that “spaceflights are gradually becoming available not only for professionals, but also for an ever wider range of interested persons,” Channel One said on its website.

Mr. Rogozin , the Russian space agency leader, said he hopes the mission will make “a truly serious work of art and a whole new development of the promotion of space technologies,” in order to attract young talent to Russia’s space program.

Funding for Russia’s space program is beginning to wane. Starting in 2011, when the U.S. space shuttle program ended, NASA could only send astronauts to the International Space Station by paying for expensive rides on one of Russia’s Soyuz rockets. But that ended in 2020 when SpaceX’s Crew Dragon proved itself capable of sending astronauts from American soil. And recently, the United States ended purchases of a Russian rocket engine long used for NASA and Pentagon launches to space, which generated billions in revenue for Moscow.

The Nauka multipurpose laboratory module, left, docked to the International Space Station alongside a Soyuz spacecraft in July.Credit…Roscosmos, via Reuters

Is this really the first movie that has been made on the space station?

“The Challenge” is the first full-length movie that will use scenes filmed in orbit. The movie will include about 35 to 40 minutes of scenes made on the station, Channel One says.

Other kinds of productions have been made in space in the past, like “Apogee of Fear,” an eight-minute science fiction film shot by Richard Garriott, a private astronaut, in 2008. Mr. Garriott, a video game entrepreneur, paid $30 million for his seat on a Soyuz spacecraft, which he booked through Space Adventures, a space tourism broker. The company is booking future missions to the space station aboard Russia’s Soyuz spacecraft.

Several feature-length documentaries have relied heavily on video shot aboard the station. “Space Station 3D,” a short 2002 documentary about the space station’s construction, was the first IMAX production filmed in space.

Are there other plans to film in orbit?

Tom Cruise may have plans to film something on the space station, but it’s unclear exactly when. Deadline, a Hollywood news publication, reported in 2020 that Mr. Cruise would fly to space aboard one of SpaceX’s Crew Dragon capsules for an action-adventure film directed by Doug Liman. Jim Bridenstine, who served as NASA’s administrator under President Donald Trump, confirmed the plans on Twitter at the time and lauded them as a chance to galvanize the public around space exploration.

Russia’s space agency announced its intention to send an actress to the space station shortly after Mr. Cruise’s plans emerged.

What problems have the Russians had with the space station recently?

Astronauts have been living aboard the space station, a science lab the size of a football field, for more than 20 years, and it’s starting to show signs of decay, particularly on the Russian side.

Several air leaks on the Russian segment of the outpost have been detected in recent years, although none have posed immediate danger to the station’s crew. Astronauts found a leak in Russia’s Zvezda service module last year by using tea leaves, and patched the leak with space-grade glue and tape. Another gradual air leak is ongoing, and its source has eluded Russian space officials.

And in July, Russia’s new science module, Nauka, carried out a chaotic docking procedure: Shortly after locking onto the station, the module’s thrusters began to fire erroneously, spinning the entire space station by one-and-a-half revolutions. None of the seven astronauts on board were harmed, but it was a rare “spacecraft emergency” that sent NASA and Russian officials scrambling to return the station to its normal orientation.

Sync your calendar with the solar system

Never miss an eclipse, a meteor shower, a rocket launch or any other astronomical and space event that’s out of this world.

Cristiano Ronaldo Is Back and So Is Manchester United