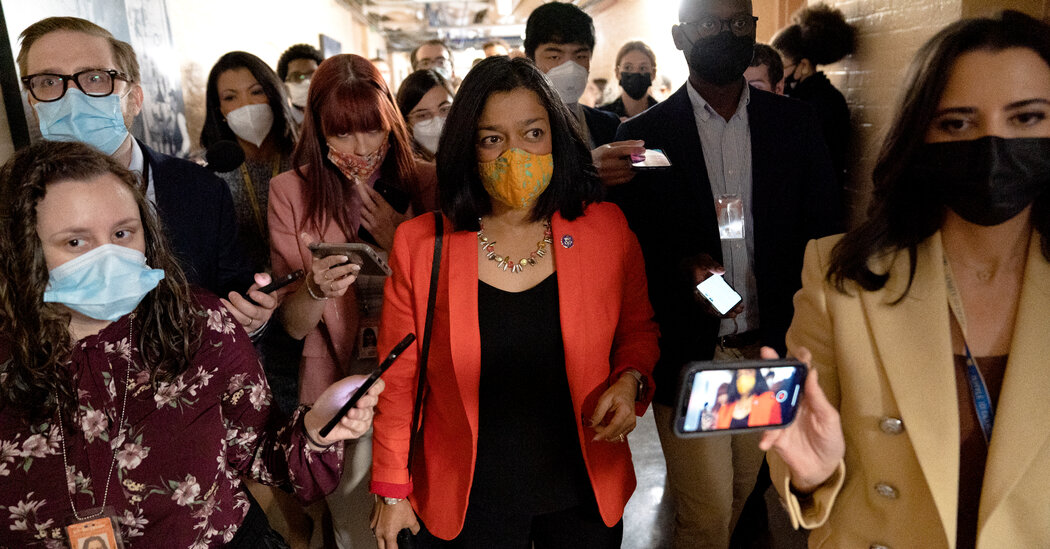 Liberals rejected demands from moderate Democrats to shrink President Biden’s domestic policy agenda by more than half, though they said they were willing to compromise.
Erdeundleben.com–

After a tumultuous week in Congress, during which deep divisions in the Democratic Party delayed progress on part of President Biden’s economic agenda, debate spilled over into the weekend as the party braced for intense negotiations in the weeks ahead.

Progressives on Sunday flatly rejected the latest demands from Senator Joe Manchin III of West Virginia, a key swing vote for Democrats, to shrink President Biden’s domestic policy agenda by more than half and to insert a provision to ensure that the federal government does not fund abortions.

Representative Pramila Jayapal, Democrat of Washington and the chairwoman of the Congressional Progressive Caucus, said that progressives would not agree to reduce Mr. Biden’s 10-year, $3.5 trillion social safety net and climate bill to $1.5 trillion, as Mr. Manchin requested.

“That’s not going to happen,” Ms. Jayapal said on “State of the Union” on CNN. “That’s too small to get our priorities in. It’s going to be somewhere between $1.5 and $3.5, and I think the White House is working on that right now. Remember: What we want to deliver is child care, paid leave, climate change.”

Mr. Manchin said in an interview with National Review last week that he was insisting that the legislation include the Hyde Amendment, which states that Medicaid will not pay for an abortion unless the woman’s life is in danger or the pregnancy resulted from rape or incest.

The Hyde Amendment has been reauthorized every year since 1976, but Mr. Biden did not include it in his latest budget proposal. During the presidential race, his campaign initially said he supported the amendment, but he later reversed course and condemned it.

Ms. Jayapal, who was one of three members of Congress who testified last week about their personal experiences of having an abortion, said she opposed Mr. Manchin’s demand.

“The Hyde Amendment is something the majority of the country does not support,” she said.

However, Ms. Jayapal and other progressives said they were willing to compromise on the package’s price tag. Several said they were discussing whether to cut certain programs from their agenda entirely or to reduce the duration of the bill’s funding — to five years from 10 years, for example.

“We can front-load the benefits and have less years,” Representative Ro Khanna, Democrat of California, said on “Fox News Sunday.”

Ms. Jayapal said that progressives were willing to explore shortening the length of some components of the funding bill to decrease its cost, but that new clean energy standards needed to stay in the legislation for a decade.

“It takes time to cut carbon emissions,” she said.

Debate has raged on Capitol Hill over the past week over Mr. Biden’s domestic agenda. The nearly 100-member Congressional Progressive Caucus blocked a House vote on his $1 trillion infrastructure bill, which is favored by the Democrats’ centrist wing. The more liberal lawmakers sought leverage to secure passage of the president’s larger $3.5 trillion domestic policy bill, which some centrist Democrats have not endorsed.

With slim majorities in both chambers of Congress, nearly every Democratic vote is needed to pass both bills.

Mr. Biden, Speaker Nancy Pelosi of California and Senator Chuck Schumer, Democrat of New York and the majority leader, have assured the Progressive Caucus that both bills will advance as part of a “two-track” process.

In a letter to lawmakers on Saturday, Ms. Pelosi urged passage of the infrastructure bill by the end of the month and signaled that Democratic leaders were continuing to negotiate the broader social policy and climate bill with Mr. Manchin and Senator Kyrsten Sinema of Arizona, two Democratic holdouts who are needed to pass legislation in the Senate.

“Again, we will and must pass both bills soon,” Ms. Pelosi wrote. “We have the responsibility and the opportunity to do so.”

Ms. Sinema released a statement on Saturday condemning the delay of the infrastructure vote, calling it a “failure” and “deeply disappointing for communities across our country.”

But Senator Bernie Sanders, the Vermont independent who is the chairman of the Budget Committee, expressed confidence in the progressives’ negotiating position, pointing to signals from the White House that their faction was right to push for a more ambitious legislative agenda.

Cedric L. Richmond, a senior adviser to Mr. Biden, predicted that both liberals and centrists would have to give some to reach a deal.

“People will be disappointed. People will not get everything we want,” he said on “Meet the Press” on NBC. “We’re going to fight until we get both bills.”

Speaking on “State of the Union,” Senator Richard J. Durbin of Illinois, the No. 2 Senate Democrat, agreed that some big choices lay ahead.

“We have to ask that very fundamental question,” he said. “Should we do everything to a limited degree, or should we really invest ourselves in the most important things?”

Blinken Faces an Awkward Visit to Paris, His ‘Second Home’