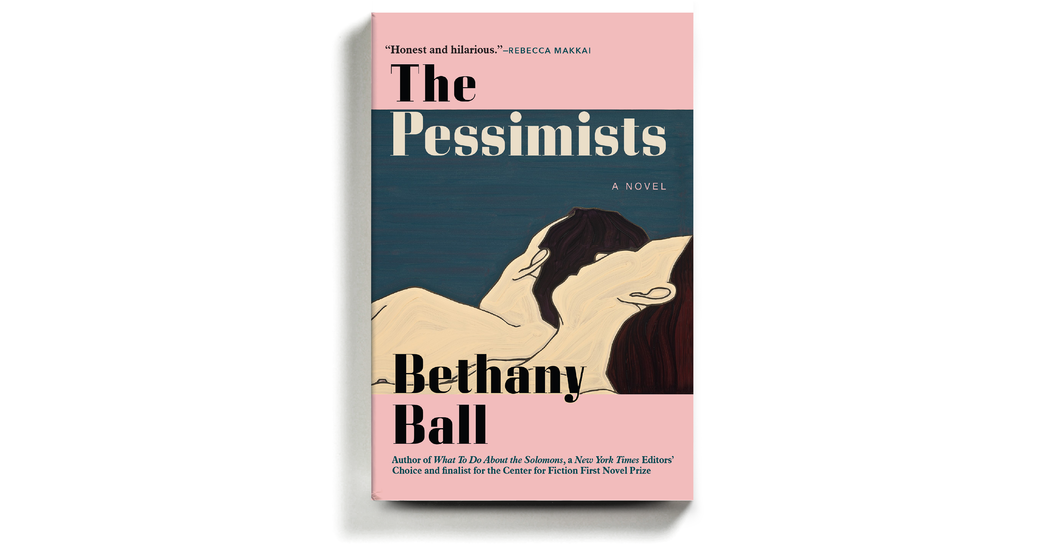 We all have our personal favorite lengths. When it comes to movies, I like 90 minutes. Pop songs: three minutes. Popsicles: four inches. Books are an exception. Sometimes I want to zip through a novella in one hour and sometimes I want to be crushed beneath the weight of an 800-page tome like a defenseless worm. “Is this book the right length?” is a question that most readers answer intuitively as they go.

For a book to feel too long is unambiguously a bad thing, but to say that one feels too short might be an endorsement: “It went by so fast, I couldn’t get enough!” Or it might not. This is the conundrum posed by Bethany Ball’s “The Pessimists,” a delectably numbed-out tale of three couples in a wealthy Connecticut suburb who face the possible destruction of their marriages, bodies, minds and the earth. At the center of their lives is an unaccredited school run by a headmistress who wears long dresses and has possible family ties to Nazis. This headmistress, Agnes, takes a cryptic approach to pedagogy, and each of the novel’s parents develops a fixation on her — in some cases, one that blooms into worship; in others, one that sours into repulsion.

At Agnes’s school, the children sit in adorable 19th-century desks salvaged from a schoolhouse in Alsace. Surrounded by slogans about mindfulness, they learn to churn butter and play with dolls that have no faces. Jewish holidays are not recognized. Vaccines and competitive sports and the consumption of gluten: all discouraged. There are no A.D.H.D. diagnoses, no dyslexia, “no learning disabilities of any kind” at the school.

The novel starts on the eve of 2013, at a dutiful New Year’s party thrown by Virginia and Tripp Powers, who are the iciest of the couples. Tripp (I pictured him as Kurt Russell in “Escape From New York” with 20 percent less cheekbone, but that doesn’t mean you have to) has a secret prepper streak. Although he works in finance and enjoys a largely risk-free lifestyle, Tripp believes the apocalypse is near and wants nothing more than to make jerky out of roadkill, filter water through moss and learn to manually pry open his garage door in case of massive electrical grid failure. His wife, Virginia, has her own secret: a lump on her breast that an oncologist describes to her as “bad news.” Each half of the couple suffers in private, not telling each other a thing. Tripp usually sleeps in the guest room.

Bethany Ball, whose new novel is “The Pessimists.”Credit…Chris X Carroll

The second couple is Gunter and Rachel. Gunter is Swedish and can’t hold his alcohol. He compares his wife to “a wet towel discarded on the bathroom floor.” Rachel feels exiled in the suburbs and nibbles on Xanax to soothe her nerves. When she has doubts about Agnes’s school — a teacher criticizes her child for not being “cuddly” enough — she calmly reminds herself that Ally Sheedy, Tori Spelling and “one member of an Irish megaband” all sent their children there.

The third couple is Richard and Margot. Margot maintains a tentative hold on sanity, sublimating her anxieties into obsessive household chores. Richard hates his job in finance and cuts the dinner steak “with a knife so sharp it could shave the hair from a child’s arm, something Richard liked to demonstrate on the arm of his oldest son.”

And then there is Agnes, the book’s most charismatic weirdo. She runs her school with an iron fist, issuing proclamations against dairy and conventional shampoo and “abstract concepts.” Her posture is erect, and her powers are witchy enough that her hair changes color and length at random; first she is described as having “a helmet of sleek red hair,” and then a head of “long, straight black hair.” This might be an editing error but it kind of works as a quality of this slippery character.

Agnes doles out peculiar tasks to the parents — not “Can you please bring brownies to the bake sale?” but don’t lean against anything for a week; sense your feet; brush your teeth with your left hand. Margot finds the assigned tasks “weirdly magical.” Rachel wishes she had attended a school like the one her children disappear to every day. Gunter is the most skeptical of the school’s utopian aspirations. “School is meant to be hated,” he grumbles. “How else will children learn to endure hateful things?”

Ball is a pleasure to read. Her sentences are brisk twists of the knife; every satirical dart is a bull’s-eye. She makes a meal out of her space-cadet suburbanites, with their expensive German cars and organic apple juice, but allows their concerns to be widely applicable: Will my children grow up to be OK? Will my life amount to anything? Does my spouse secretly loathe me? Should I be worried about this lump in my breast? Is the thrill of adultery powerful enough to outweigh the guilt of it? Suffering, Ball demonstrates, is universal, and fears are often irrational. Just because a rich guy has no reason to fear that he’ll run out of money doesn’t mean he won’t be consumed by the notion.

But there’s something off about the proportions of the novel. After all of Ball’s careful setting-up — the school, the illness, the survival training — the book seems to end in the middle of the second act, with sinister Agnes fading into the background and the school’s creepiness coming to no particular climax. There’s a hasty violent scene that answers few of the questions proposed so skillfully at the book’s beginning. As I neared the conclusion, I found myself anxious about the thinning slice of unread pages in my right hand, hoping “TO BE CONTINUED…” would be typed at the end. To be left wanting much, much more at the end of 300 pages might hint at a structural problem, but it is also a compliment.