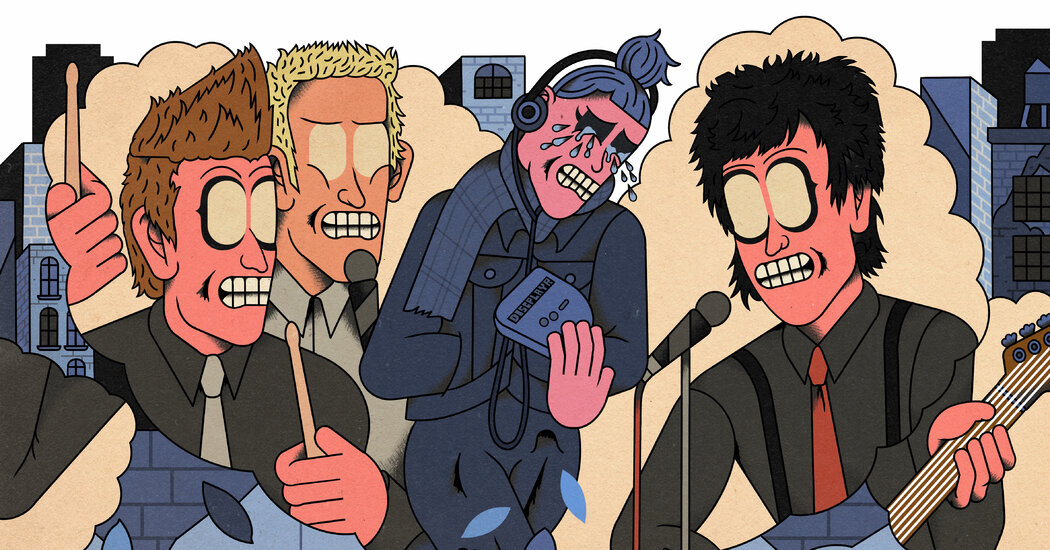 Sometimes you need an overwrought antidote to the overwhelming events of daily life.
Erdeundleben.com–

When I receive disappointing news, I allow myself to wallow for exactly four minutes and 22 seconds: the length of the 2004 Green Day hit “Boulevard of Broken Dreams.” I focus on nothing but my feelings for the duration of the song, which expresses emotion in such cartoonish terms that, listening to it, I can indulge in maudlin self-pity.

Green Day was my world’s soundtrack in the early aughts, providing pop-punk angst at mall food courts, graduations and birthday parties. “Boulevard,” from the album “American Idiot,” is an emo power ballad, full of mixed metaphors expressing the privileged blah of being bored and misunderstood in the suburbs of a morally compromised nation. Conceived of as a sort of rock opera, “American Idiot” follows the ups and downs of its protagonist, “Jesus of Suburbia.” As the character’s name might suggest, the entire album operates at a melodramatic pitch, with Jesus encountering adversaries and feeling misunderstood everywhere he turns. “Boulevard” narrates a low point in the hero’s journey. The singer, Billie Joe Armstrong, resembles a musical-theater protagonist when he sings lines like “I’m walking down the line/That divides me somewhere in my mind/On the borderline/Of the edge, and where I walk alone.”

When “Boulevard of Broken Dreams” came out, I was 9. It made me feel like a kid from “School of Rock.” I appreciated its intelligibility and, from where I stood, its edge. I was not really into cool music back then. My prized album, which I listened to on my red CD Walkman from Radio Shack, was the soundtrack to the movie “Holes.”

I was too cautious to participate when my classmates passed around burned copies of Green Day CDs on the playground at school. One weekend, though, I was delighted to be invited to a slumber party by classmates who did things like get pink streaks in their hair and wear little mesh gloves from Hot Topic. (I myself stuck to a uniform of “Life Is Good” shirts with black stretchy pants in this period; I sometimes wore foam earrings shaped like wedges of cheese to school.) But that night, I felt transgressive. We sang karaoke. We looked at pictures of Pink on the computer. We screamed the lyrics to “Sk8er Boi.” And, ecstatically, we listened to Green Day and Good Charlotte. High on rocking out and being included, I let another girl write the name of one of those two pop-punk bands — I can’t remember which — in huge letters on my arms in black Sharpie.

Then I came crashing down. The party was over. I hid my arms in my hoodie when my mom came over to get me. I was embarrassed to reveal that, for a few minutes, I had escaped into a high-velocity version of reality. “Boulevard of Broken Dreams” mimicked the intensity I felt in my angstiest moments; it mirrored a heightened version of my emotional reality back to me. Now, years later, I look back with amusement and even jealousy at the purity of those feelings. So recently, I have found myself drawn anew to the earnest drama of this song.

The central premise of “Boulevard of Broken Dreams” is that the character is walking around feeling isolated and bummed for reasons the band leaves vague — the better for the listener to insert her own experience. “I walk alone,” Armstrong sings in overwrought fashion. “My shadow’s the only one that walks beside me.” The lyrics are repetitive, as if trying to blow up the character’s suffering to widescreen proportions. At points, Armstrong sounds so swollen with emotion that he cuts himself off in the middle of a line. The dour F minor key and abrasive strumming give the gift of broad, atmospheric ennui to those who want to stew.

Such dramatic displays of emotion are, of course, frowned upon in daily life. But overwhelming events continue apace even as the range of acceptable ways to react shrinks. In that context, it is validating to access and embrace high drama, even if only for a few minutes, in response to even minor provocations. I am not walking along the song’s proverbial boulevard of broken dreams, I realize. No — someone just failed to text me back. It comforts me to face an operatic version of emotional reality, then to just shake it off and move on. Listening to the song, I enter a world where people scream what they mean and am transported back to the simpler emotional state of my stretchy-pants days.

This summer, I was standing on a subway platform heading uptown when I received an expected but still deflating rejection email from an editor. I had worked hard on my pitch and secretly nursed the fantasy that my story idea would be accepted. So when she very kindly told me it could not be, I felt my face get hot and my stomach sink in disappointment.

But instead of bursting into tears, I popped in my AirPods and played “Boulevard of Broken Dreams.” When the train pulled up, I sat down. I tapped into the childhood bluntness of feeling misunderstood, and by the time the fourth minute rolled around, I laughed. When I got to 96th Street, I felt fine. I met my parents for dinner.

Much of my youthful angst has dissolved as I’ve aged, and that has been on the whole a positive and appropriate development. But in times when I feel swells of disquietude, I don’t try to suppress them. I honor them, ever so briefly. For just over four minutes, I walk alone on a lonely road. Then when it’s over, I remember the people around me and move on.

How to Be Less Fearful of the Dark